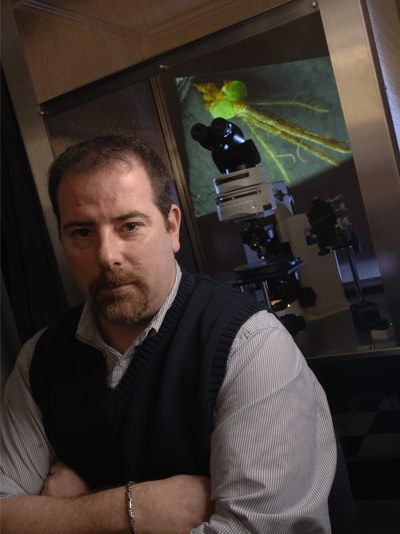 L. J. Zwiebel is a native New Yorker and received his undergraduate (B.S) degree in Biochemistry from the State University of New York at Stony Brook working under Dr. Masayori Inouye (National Academy of Science, USA). He completed a M.S. degree in Biology at the University of Michigan and his Ph.D. in Molecular Genetics from Brandeis University working on the role of the period gene in circadian rhythms under Drs. Jeffery Hall and Michael Rosbash (National Academy of Science Members and Nobel Prize in Medicine, 2017). After completing his PhD, Dr. Zwiebel was a postdoctoral fellow with Dr. Fotis C. Kafatos (National Academy of Science, USA) at Harvard University and The European Molecular Biology Laboratory (Heidelberg, Germany). He joined the faculty of Vanderbilt University as an Assistant Professor of Biology in January 1998 and has since been appointed as Associate and Full Professor (with tenure) of Biological Sciences as well as being named the Cornelius Vanderbilt Chair of Biological Sciences in 2012. Dr. Zwiebel is also privileged to be appointed as Professor of Pharmacology at Vanderbilt University Medical Center as well as a member of the Brain Institute and the Institutes for Chemical Biology and Global Health as well as Vanderbilt's Programs in Developmental Biology, Genetics and Molecular Biophysics. He is responsible for mentoring students and trainees ranging from undergraduate and graduate students to postdoctoral fellows and has taught courses at Vanderbilt and other institutions on Vector Biology and Global Health, Molecular Neuroscience, Cell Biology as well as Introductory Biology. Dr. Zwiebel's academic research focuses upon the molecular and neurological characterization of behavioral processes that impact host (i.e. blood-meal source) seeking and selection in disease vector mosquitoes. The lab examines the molecular events of olfaction (smell) as this sense predominates the overall host preference behaviors in mosquitoes and other insects and as such makes a significant contribution to the vectorial capacity of these mosquitoes. Knowledge from these studies will be used to adapt new approaches for modifying mosquito behaviors-specifically the strong attraction to humans. In addition to several federally funded research projects, Dr. Zwiebel was the lead investigator of an international network of laboratories that was selected for a Grand Challenge in Global Health award from the Bill and Melinda Gates Foundation for the specific purpose of using state of the art molecular approaches to design a new generation of mosquito repellents and attractants. The Zwiebel Lab also studies the role of olfaction in mediating the complex behaviors of eusocial ants, which use cuticular hydrocarbon (CHCs) pheromones to mediate social behaviors such as aggression, caste and nestmate recognition, as well as the regulation of reproduction and neuronal plasticity. These findings open the possibility of studying using ants as a model system to examine the genetics of sociality as it relates to humans and other animals. Beyond his research and teaching activities at Vanderbilt University, Dr. Zwiebel acts via numerous national and international speaking engagements and teaching venues as an advocate for Vector Biology/Global Health issues and serves on several advisory and review panels for the US National Institutes of Health, The Bill and Melinda Gates Foundation, The Institut Pasteur, The Max Planck Society, The Wellcome Trust and The World Health Organization.