Farias Fernando Romane recently moved from the Coalane neighborhood to Canecos, within Quelimane District. The move meant that he also changed the health facility where he receives HIV care. When our team met him, it was only his second visit to 24 de Julho Health Center. He was already pleased with the quality of care he has been receiving.

“The first day I arrived I noticed that things at this health center work very well. I brought my transfer referral form, and in less than five minutes they called me for a talk, to learn my [health] history and so that they would have all of my information,” Farias told us.

After his first counseling session, he was given a date for his next session and antiretroviral (ARV) medication pick-up. He stated that he was very impressed with the quality of care he received during both clinic visits.

“As soon as I arrived I was given a ticket and afterwards, [a health counselor] accompanied me to this room for counseling. I see all of this as positive for my health. Those delays of over an hour that used to happen in the past ended up hurting the patients. Many would even give up [on continuing treatment],” Farias told us.

The thirty-two year old male is married and is the father of five children. He tells us he is proud to work as a janitor at two local schools, to earn a living and take care of his family.

Farias learned that he has HIV approximately nine years ago, but he ignored his status for the first seven. He was not convinced that he needed treatment because he did not feel ill. But as the years passed, his conscience began to weigh on him and in 2015 he decided to take another HIV test. This time he accepted the positive result. Farias ensured that his wife and children were all tested as well. They are all HIV negative.

He is now an adherent patient on combination antiretroviral therapy (ART). However, in the past he felt quite frustrated about the reception he received at the health facility.

“I used to go to the Coalane Health Center and I saw that [the doctor] was delaying the initiation of my treatment. I started calculating how long ago I was first diagnosed with HIV and I realized many years had passed, and this situation could be bad for me,” he told us. He became concerned about his health and how long it was taking to enroll on ART. He then decided to seek treatment at another health facility. Today, he is content to be on treatment, and is also very pleased with the quality of care he receives at 24 de Julho. He also stated that he has noticed a positive change in the quality of care over the past six months: an increase in the number of counselors available and a decrease in wait time.

Farias’s counseling session was conducted by an FGH counselor Teresa Rossumane, one of 9 new health counselors recently contracted by FGH at the 24 de Julho Health Center, increasing the total number of counselors there to 17. FGH has contracted a total of 124 new health counselors for Quelimane District since January 2017, when FGH first began its support to the capital district. The increase in health counselors is meant to strengthen the provision and quality of health services delivered, specifically in the area of HIV/AIDS.

Health counselors are often the first point of contact a patient has at a health facility. As stated by FGH Psychosocial Support Manager Grace Fumane, health counselors play a fundamental role: “Considering that the health counselor is at all testing points, they are key personnel. Their work includes counseling and patient follow-up.” Counselors help patients navigate through both the health process and the building itself, improving patient flow and decreasing wait times. Their primary role is to provide counseling to patients on a wide variety of HIV-related topics such as ARV medication adherence, opportunistic infections, or prevention of mother-to-child transmission (PMTCT).

According to Cristina Impelua, the Director of 24 de Julho, among the various areas of support provided by FGH, the provision of health counselors has significantly contributed to the improvement of health care quality. “Our partnership has just begun, but there are already significant results. One of them is the support we get with regards to human resources, especially health counselors. As a result, patient reception has greatly improved. Above all, with regards to waiting time, patients no longer have to wait for long to be seen.”

Teresa explains to us that working in urban Quelimane is a challenge, but one that makes her happy. “For us, counseling people from the city is a bigger challenge. Often times they say they know things. They, however, consistently refuse to follow good health practices. Much patience and dedication is needed. And when we manage to counsel one person to the point that they start improving their behavior, the satisfaction is immense.”

After his counseling session, Farias collected his ARV medications and went home. He was content that he didn’t have to spend the entire day at the health center. He promised to return the next month to continue his treatment. 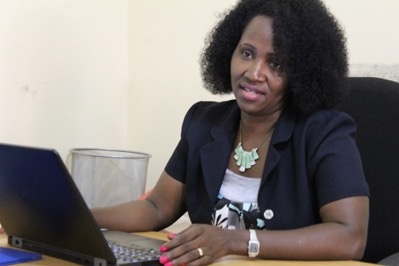