Dagoberto Estévez-Ordóñez, M.D., was recently awarded the Sten H. Vermund Award for Excellence in Global Health. This award recognizes the graduating medical student who has most demonstrated a strong commitment to improving the health of the people of or from a low- or middle-income country through distinguished scholarship, education, and/or contributions to the improvement of clinical care. The award was established in 2017, to honor Dr. Sten H. Vermund who was the founding director of the Vanderbilt Institute for Global Health.

Dago was born and raised in Honduras in challenging circumstances, but nevertheless engaged during high school in mission work, including medical translation in even poorer communities in Honduras and Guatemala. Dago completed his undergraduate education at Brigham Young University in Utah, where he engaged in basic cancer research. In 2013, he matriculated at Vanderbilt University School of Medicine (VUSM). He participated in several research projects at Vanderbilt, including domestic projects on orthopedic trauma, health policy, quality improvement in preoperative blood transfusion, outcomes after an aneurysm clipping procedure, and reducing hospitalization rates and ED visits by patients with sickle cell disease, as well as US-side involvement in education of patients with diabetes in Nicaragua. Two of these projects resulted in peer-reviewed published manuscripts.

He was awarded a global health fellowship from the Fogarty Global Health Fellows Program through the Vanderbilt-Emory-Cornell-Duke (VECD) Consortium, which took him to Honduras during the 2015-16 academic year, where he pursued research projects in gastric cancer, under the direction of Dr. Doug Morgan, VUMC, and in neurosurgery. To date, he has published a paper on congenital malformations of the central nervous system in Honduras, and he has additional manuscripts in preparation or review. In January 2017, he presented findings from his gastric cancer research at a VECD Consortium research conference in Nashville.

Dago also participated in VIGH’s Global Health Case Competition in 2014, where his team took third place. He was active in AANS Medical Student Chapter, VUSM’s Global Health Organization, the Latino Medical Student Association, the Student National Medical Association, and the Maimonides Jewish Student Organization. He will pursue residency in neurosurgery at the University of Alabama at Birmingham, with a long-term goal of improving neurosurgical capacity and care in low- and middle-income countries. 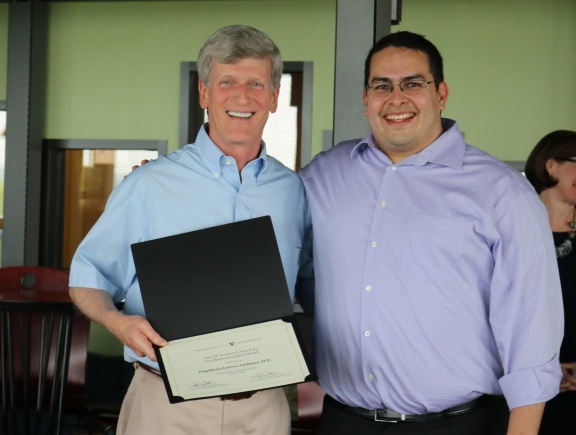