Ducha António was first diagnosed with HIV in 2008, during an antenatal consultation. She was just sixteen years old and did not fully understand what HIV was or the impact it could have on her life. She refused treatment for herself, and she was also reluctant to have her infant daughter tested. “I was a teenager with little knowledge of things, so I just ignored treatment.”

Ducha’s partner, the father of her daughter, was a married man from Maputo. He returned to Maputo and she never saw him again. She later learned that he had died. “I never knew his health status. So, I did not know it, if he lost his life due to AIDS,” Ducha told us.

It was in 2015 that Ducha happened to see a dramatic performance by Juntos theatre group while attending the health facility in Namacurra Sede with her daughter. Two years later, she still remembers the plot of the play. It had a huge impact on her and in fact changed her life.

“They were talking about people that get infected by HIV and learn their HIV status but due to shame refuse treatment. They used the example of a pregnant woman infected with HIV who refused treatment due to fear. As a consequence, she ended up losing her baby. Later, she decided to accept the advice from the health worker, and on her second pregnancy, she took the HIV treatment. She became healthy and had a baby free of HIV.”

This story resonated with Ducha deeply and prompted her to reconsider her initial reaction to the HIV diagnosis she had received seven years before. “I went back to my house and started reflecting on what they had talked about. I decided to go to the hospital and started HIV treatment. From then on I have felt very well.” The story about the pregnant woman who lost her baby to HIV made Ducha realize that her daughter was also at risk for HIV. “When I came to my senses, I took my daughter to take the HIV test. Thank God the result was negative. Today she is nine years old and is in the fourth grade.” 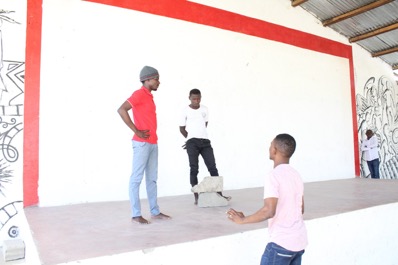 Juntos is a theatre group active in the district of Namacurra that regularly performs brief dramas addressing a variety of health topics, including HIV. Volunteer actors receive technical support from the Friends in Global Health (FGH) Communications Team. They learn participatory theatre techniques such as creating drama with the right amount of tension to get their audience’s attention, while also learning how to stop the play at opportune times during the performance so they can properly engage those in attendance by having them personalize what is being presented asking them if they have ever experienced similar health issues in their own communities and what should the characters in the performance do next to address these very real issues.  Audience participation is fundamental; when a solution is presented by the community itself there is a greater chance that the community will accept it.

Before delivering new plays to the community, Juntos first performs to health workers and Community Involvement Officers from FGH and SDSMAS (District Services for Health, Women and Social Action), who review the plays for accuracy in terms of the health information being delivered. No new plays are performed for the community without at least one review.

The theatre group actors are themselves positively affected by their involvement in community mobilization. They personalize the health messages being presented to their own lives and situations, which helps foster further investment in the health of their communities. The Juntos leader, twenty-seven year old Lourenço Marques, told us the following story: “Once we went to perform in the Musseliua-Mause [a small community in the district of Namacurra]. After the presentation, a young man immediately requested to be tested for HIV. That was a touching moment for us. We felt that the result of our work is visible. That motivates us to carry on working.” 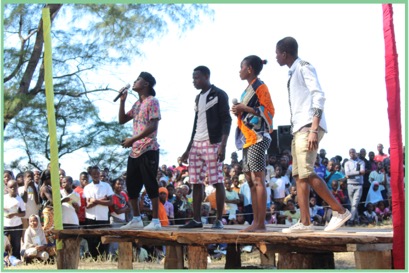 "Juntos" theater group presenting a play about the importance of using condoms.

We also talked to José Fernando, the SDSMAS Community Involvement Officer at the Namacurra Health Center about the impact the theatre group is having in his district. “The impact of the theatre group is positive. Behavioral change is happening in the communities where they go, above all in regards to HIV and tuberculosis. We see this in the growing demand for health services. We must continue this type of community mobilization.”

FGH currently works with 15 theatre groups, one in each supported district within Zambézia province. In Quarter 3 of COP16, there were 507 theatre performances by FGH supported theatre groups in Zambézia, with 7,658 people in attendance. 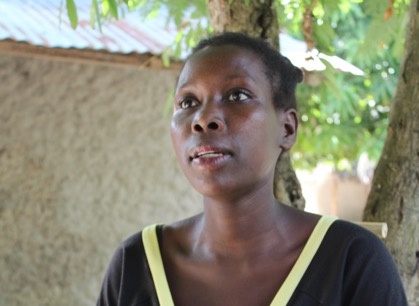