The Impact of Community-Based Information, Education and Communication Initiatives and Importance of Community Adherence Support Groups 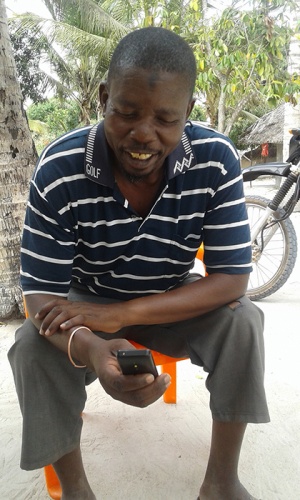 Abudo Nicuacua was diagnosed with HIV in 2006. Today, Abudo is an antiretroviral treatment (ART) adherence role model, but this was not always the case. Although he began ART shortly after his diagnosis, he was not convinced that the medications would improve his health. He quickly abandoned care and stopped taking his ART soon after enrollment.

Then, in January 2016, Abudo attended a community talk by Friends in Global Health (FGH) trained Male Champion Juma Mantabajabo. The message that stood out to him was that “A person who abandons treatment is putting his life at risk.” Abudo approached the presenter right after the talk with a number of questions. Juma encouraged him “to go back to the health facility to reinitiate ART.” Going through this personal reflection and experience helped transform Abudo into becoming a strong advocate and promoter for ART adherence, as he deeply understood the impact that his words could have on other patients. Since that experience, Abudo has become an FGH-trained Peer Educator.

Part of Abudo’s work as a Peer Educator is to encourage the creation of Community Adherence Support Groups (CASGs). CASGs are groups composed of up to six HIV+ people on ART who share the rotating responsibility of medication pick-up. The groups allow members to visit the health facility as little as twice per year, combining medication pick-up for all members with individual medical consultation. Patient retention on ART is negatively affected by long health facility wait times. Many patients also have to travel long distances to health facilities, only to wait for hours in the bright sun or in the rain to pick up their medications. As ART is usually dispensed on a monthly basis, this experience can be very discouraging for patients. CASGs can significantly reduce the amount of time patients need to spend at the health facility, which can help improve retention to treatment. In addition to being the focal point of his own CASG, Abudo encourages the creation of more CASGs in his community as part of his work as a Peer Educator.

Another patient, Abdul Ossifo, found that it was not easy to be adherent to ART when he first started taking his treatment in 2014. “The problem was getting to the health facility and the time it took to be seen [by a clinician].” But after meeting Abudo Nicuacua (FGH Peer Educator), Abdul was encouraged to create his own CASG to help alleviate the challenges he was facing picking up his medications. Abdul is now the focal point of a Community Adherence Support Group (CASG) in Pebane District, Zambézia Province. As focal point, Abdul ensures the group meets periodically and maintains communication between his group and their established health facility.

Mariamo Jamal is another CASG focal point whose group was established with the help of Abudo Nicuacua. “Being a CASG member changes everything,” he told us. “Today, when one of us goes to the health facility to collect medication, it does not take a long time anymore.”

Simão Hélio Benjamim, Pebane District Community Involvement Deputy and Epidemiology Focal Point, praises Abudo Nicuacua’s community work. He recalls that Abudo had abandoned ART, but after receiving “a counselling session, he thoroughly followed the provided guidance. Today, not only is he adherent, as he is also a very active person.” He started encouraging other people to adhere to ART. “When there is a dropout, Abudo does not hold back any effort. He goes searching for any family that has abandoned treatment,” adds Simão.

Abudo’s dedication has been changing the lives of people on ART in Pebane. Mariamo Jamal feels that his life changed for the better as a result of the Peer Educator’s dedication. Mariano recalls having “suffered a lot before Abudo guided us to create a CASG.” Abudo encourages the creation of CASGs by delivering health talks at churches, mosques, water pumps, and within the health facility.

Abudo also carries out patient contact tracing activities. He is always looking for ways to inform as many people as possible about the importance of taking the HIV test and of adhering to ART. He now volunteers two days per week at the Pebane Sede Health Facility and two days per week in his community. At the health facility, he accompanies HIV patients through the various services and delivers informational talks to patients. In the community, he carries out patient tracing activities and patient home visits with the goal of increasing adherence to treatment.

Abudo’s journey from a patient who had abandoned treatment, to being inspired by a community talk, to then delivering talks himself and helping other HIV+ people to establish groups that will prevent them from abandoning treatment shows the positive cascading effect of FGH’s community work.