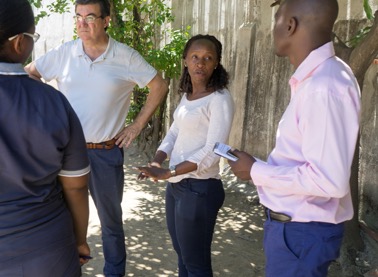 “The bigger the challenge, the more opportunities to get things done.” – Dr. Julieta Matsimbe

Julieta Manuela Matsimbe is a 30 year old Mozambican doctor, mother of a three year old boy, and FGH’s new Clinical Implementation Manager for Quelimane District. After beginning her medical career in Nampula Province, and later Maputo, Dr. Matsimbe felt the need for a new professional challenge. She applied for a position with Friends in Global Health (FGH) and in January 2015 she was hired as the Clinical Advisor for Ile District. She led a multi-disciplinary team, supporting the implementation of Avante Zambézia activities in the district. She enjoyed her new work and the rural surroundings:

“I had not worked in a district before. It was a very positive experience, I learned a lot.”

In her new position, in addition to leading the district team, Dr. Matsimbe collaborated with the FGH District Coordinator as well as MoH’s District Medical Chief and District Health Director to collaborate on the implementation of project activities. Clinical mentoring was also a large part of her position. She describes mentoring as “working together with the clinician and building competencies so that the clinician can give the best possible support to the patient.”

During Dr. Matsimbe’s time in Ile she worked to improve the identification of patients in need of second line treatment for HIV. “There were some patients without a good clinical evolution. Clinicians were not trying to look for a second option or an opportunity for the patient, but thanks to the clinical mentoring process, a couple of patients meeting the criteria to initiate second line ART treatment were referred and approved as patients [for second line treatment].”

Continuing with FGH, Dr. Matsimbe later moved to Maganja da Costa, where she contributed to a dramatic increase in retention of patients on antiretroviral therapy (ART). In Maganja da Costa, she found a very capable district team, which she strengthened further.

“I got everyone involved in the results. I helped everyone to feel empowered and accountable for the results the team would see at the end of the reporting period. Everyone came to understand that his or her contribution is important to reach any kind of results, good or bad. In their own way, team member was committed and took responsibility for the results.”

Dr. Matsimbe says that she has learned a lot from working with FGH. Her knowledge of HIV has increased, not only in the medical sense, but also in learning new approaches to retention and community engagement. She is especially interested in learning more about monitoring and evaluation. She is appreciative of the professional training she has received and of the positive environment created by her colleagues. “Every colleague is very supportive to learn, to teach, and to show the diversity of paths there are to reach the project's goal.”

Eager to expand her career, and "to learn new things, to face new challenges without leaving the technical clinical area,” Dr. Matsimbe recently applied to the position of Clinical Implementation Manager in Quelimane District. Quelimane, the capital of Zambézia province, is a new geographic focus area for FGH under the recently awarded cooperative agreement Avante: Towards Epidemic Control. The efforts of the Clinical Implementation Manager position will focus on working closely with the Clinical Advisors to ensure consistent high quality clinical mentoring and program implementation. She tells us she wants to be sure they are on the same page with regard to reaching programmatic targets. She will also provide support for the coordination and planning process with the Provincial Health Directorate (DPS). “It all starts with good planning and good follow-up of activity plans.”

During the first quarter following the award of Avante: Towards Epidemic Control in September 2016, FGH focused on the transition process, assuming responsibility for supporting health facilities previously supported by International Center for AIDS Care and Treatment Program (ICAP). The transition period included a large recruitment effort. FGH hired 126 new personnel in the first quarter, with plans to continue scale-up in the second quarter, to increase capacity in Quelimane district.

Moving from the rural districts to Quelimane will present a new challenge for Dr. Matsimbe. Previously, at the district level, she worked with 12 rural health facilities. Quelimane City is an urban environment, with a much larger population than Ile or Maganja da Costa Districts. “In Quelimane, five or six health facilities represent the patient volume of an entire district. So it is a very large volume, and it is a great challenge.”

She also refers to the lack of space in the health facilities as a potential problem. Because of the larger patient volumes, health facilities in the city are more crowded than those in the districts. She tells us “There is also the fact that existing buildings are made up of rooms that were added one by one, thus, most rooms do not have windows, and there is limited air circulation. Due to the health facilities’ expansion, electricity is also a problem. The electric installation has not been adjusted to the new needs. Work has to be done to improve these things, which we are already doing.”

Dr. Matsimbe is ready to work hard. “The bigger the challenge, the more opportunities to get things done. There is a lot of space for us to make small changes that can make a huge difference. I'm sure with the team we have here we will be able to improve things,” she concludes.