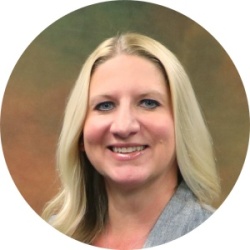 Amanda Dickert received her Bachelor of Science in Nursing degree from Western Kentucky University in 2002. She then worked as a staff nurse and Charge Nurse in the Trauma Intensive Care Unit at Vanderbilt University Medical Center (VUMC).  She obtained her Masters degree from Middle Tennessee School of Anesthesia and began practicing as a CRNA (Certified Registered Nurse Anesthetist) in 2008. She worked in the Adult OR at VUMC specializing in Neuroanesthesia from 2008 until 2013. At that time, she transitioned to Monroe Carell Jr. Children’s Hospital at Vanderbilt. She joined the pediatric division as Lead Pediatric CRNA and lead that team until 2018. At that time, she transitioned to the role of Associate Chief CRNA for all anesthesia CRNA divisions.  She obtained her Doctoral Degree from Middle Tennessee School of Anesthesia in 2020.   She also received the credentials of Nurse Executive Advanced – Board Certified in 2020. She is currently serving in the role of Interim Chief CRNA , Director of Advanced Practice for VUMC.