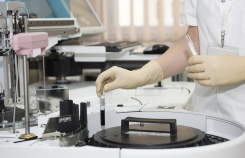 Using an antibody generated at Vanderbilt University Medical Center that neutralizes the Ebola virus, researchers at the Scripps Research Institute in La Jolla, California, have determined the structure of a “decoy” protein that may enable the virus to evade detection by the immune system. Their findings, published Aug 8 in Nature Microbiology, should aid the design of effective vaccines and antibody treatments against Ebola, which has a 50 percent mortality rate.
Bill Snyder
http://news.vanderbilt.edu/2016/06/vanderbilt-and-human-vaccines-project-launch-initial-studies-to-decode-the-human-immune-system/ 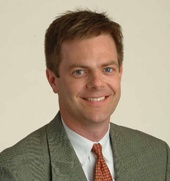 Researchers at Vanderbilt University Medical Center this month began recruiting volunteers to participate in a clinical trial aimed at decoding the human “immunome,” the genetic underpinnings of the immune system. The study is the first phase of an international effort led by the Human Vaccines Project, a public-private partnership of academic research centers, industry, non-profits and government agencies designed to accelerate the development of next-generation vaccines and immunotherapies. [James Crowe Jr., M.D.] James Crowe Jr., M.D.
https://t.e2ma.net/webview/dikwg/3b62d912cf0d3a35b102fd600876e965 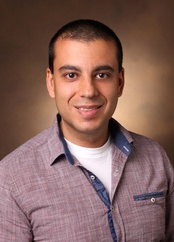 NASHVILLE, Tenn. (WKRN) – Two major announcements came Tuesday regarding therapidly-spreading Zika virus in the Americas. The Centers for Disease control announced it is at its highest level of activation, and President Barack Obama will ask Congress for nearly $2 billion to prevent it’s spread. There have been 35 reported cases of Zika in the United States, all of them associated with travel to other countries, in Hawaii, California, Minnesota, Texas, Illinois, Arkansas, Georgia, Florida, Virginia, Washington DC, New Jersey and Massachusetts.
Tracy Kornet
http://www.wsmv.com/story/31142789/vanderbilt-doctors-working-on-zika-virus-vaccine
The mosquito-borne Zika virus known to cause birth defects is expected to spread across the world. The call for a cure and vaccine has intensified after Dallas health officials confirmed this week that a case of the virus was transmitted through sexual contact.Scientists at Vanderbilt are part of a possible solution. The World Health Organization recently dampened hopes of a quick vaccine for the virus.
Alexandra Koehn
Posted in
2016
http://www.newschannel5.com/news/local-doctors-looking-to-cure-the-zika-virus 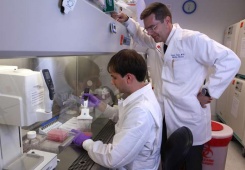 There may be a "silver bullet" for Ebola, a family of hemorrhagic viruses, one of which has killed more than 11,000 people in West Africa in the past two years. Researchers at Vanderbilt University Medical Center and the University of Texas Medical Branch in Galveston (UTMB) reported today in the journal Cell that they have isolated human monoclonal antibodies from Ebola survivors which can neutralize multiple species of the virus.
Anna Azvolinsky
http://www.the-scientist.com/?articles_view%2FarticleNo%2F45146%2Ftitle%2FCross-Reactive-Ebola-Antibodies%2F= 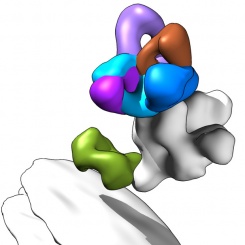 From blood samples of survivors of a 2007 Ebola outbreak in Uganda, researchers have isolated antibodies that are protective and can neutralize two other species of Ebolavirus, including ­­Zaire ebolavirus—the one responsible for the massive 2014 outbreak in West Africa. The binding specificities of these human monoclonal antibodies and their activity in animal models of Ebolavirus appeared today (January 21) in Cell.
http://www.cell.com/cell/abstract/S0092-8674(15)01686-4 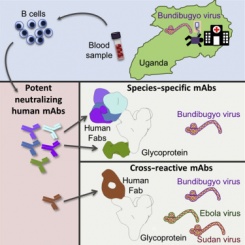