Vanderbilt Medicine has a long-standing history and track record of being an internationally recognized leader in the field of arrhythmia research and therapeutics. Vanderbilt investigators have been at the forefront of basic and clinical discovery in mechanisms underlying arrhythmias and their variable responses to treatments, notably the development of proarrhythmia defined by CAST (in which Vanderbilt was a leading participant) and by studies of QT prolongation. More recently, Vanderbilt investigators have pioneered mechanistic research in drug-induced and genetic heart rhythm disorders, including the identification of rare and common genetic variants associated with arrhythmia risk, and the development of the first molecularly-targeted anti-arrhythmic drug therapy in a rare genetic arrhythmia disorder. The next frontier in arrhythmia research and therapeutics is to translate the detailed genetic information into mechanisms at the molecular and cellular level, and to translate the basic discoveries into optimal personalized care for patients with abnormal heart rhythms and to new drug development. This will require multidisciplinary research teams that include geneticists, bioinformatics specialists, structural biologists, cell biologists, basic ion channel biologists and clinical electrophysiologists as well as an infrastructure in basic electrophysiology equipment, research cores for sample processing and storage, bioinformatics, electronic patient databases, and clinical trial support. Fortunately, Vanderbilt already has tremendous and unique (e.g., BioVU) existing strengths in these areas, so that with a modest investment in research infrastructure and new faculty recruitment a nationally recognized center of excellence in arrhythmia research and therapeutics can be launched in a short order. The center is a logical extension of ongoing collaborations and NIH funded projects by Vanderbilt investigators doing cutting edge arrhythmia research and clinical trials. The new center also capitalizes on strengths in many existing Vanderbilt departments (e.g., pediatrics, biochemistry, pharmacology), divisions (e.g., clinical pharmacology, cardiology), institutes (e.g., Oates Institute, VICTR) and centers (e.g., center for structural biology). 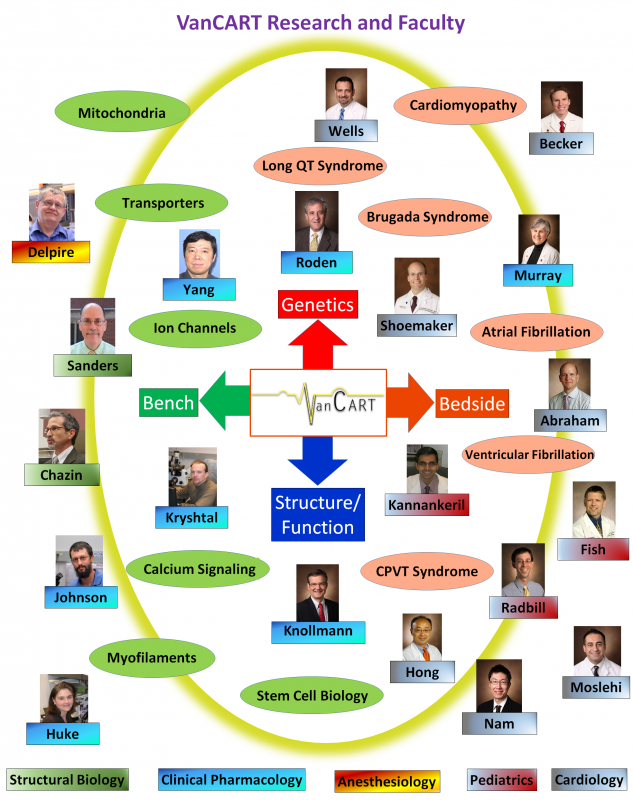