Our research program focuses on the role of endocannabinoids in stress-induced neuroadaptation.

Our research program focuses on the role of endocannabinoids in stress-induced neuroadaptation.  Psychosocial stress is a key trigger for the development and exacerbation of a variety of psychiatric disorders including depression, addiction, schizophrenia, and post-traumatic stress disorder. By understanding the molecular, structural, and physiological adaptations in endocannabinoid signaling that occur in response to stress, we hope  to uncover novel bio-markers and pharmacological targets for drug development. In addition, we hope these investigations will provide insight into the pathophysiology of stress-related neuropsychiatric disorders. We use a variety of techniques including electrophysiology, mass spectrometry, protein biochemistry, genetic models, and functional anatomical studies to understand the role of endocannabinoids in the brain's response to stress.

Cannabinoids, such as tetrahydrocannabinol (THC, shown below), are a class of psychoactive organic molecules produced by the plants cannabis sativa and cannabis indica (below). Within animal tissues, these compounds activate cannabinoid receptors to exert physiological and behavioral effects. Cannabinoid receptors (CB1 and CB1) are members of the GPCR superfamily and often couple to Gi/o  signaling pathways. CB1 is predominantly expressed in the mammalian CNS and exhibits a widespread distribution in brain regions that control movement, cognition, and motivation. Thus, the subjective effects of cannabis range from euphoria, reduced anxiety, sedation, impaired memory, judgment, and in some cases paranoia and hallucinations. Recent epidemiological studies indicate that cannabis use, especially early in life, can predispose genetically susceptible individuals to develop mental illnesses such as schizophrenia. One aim of our research is to understand how cannabinoids interact with neurodevelopmental processes to increase vulnerability to mental illness 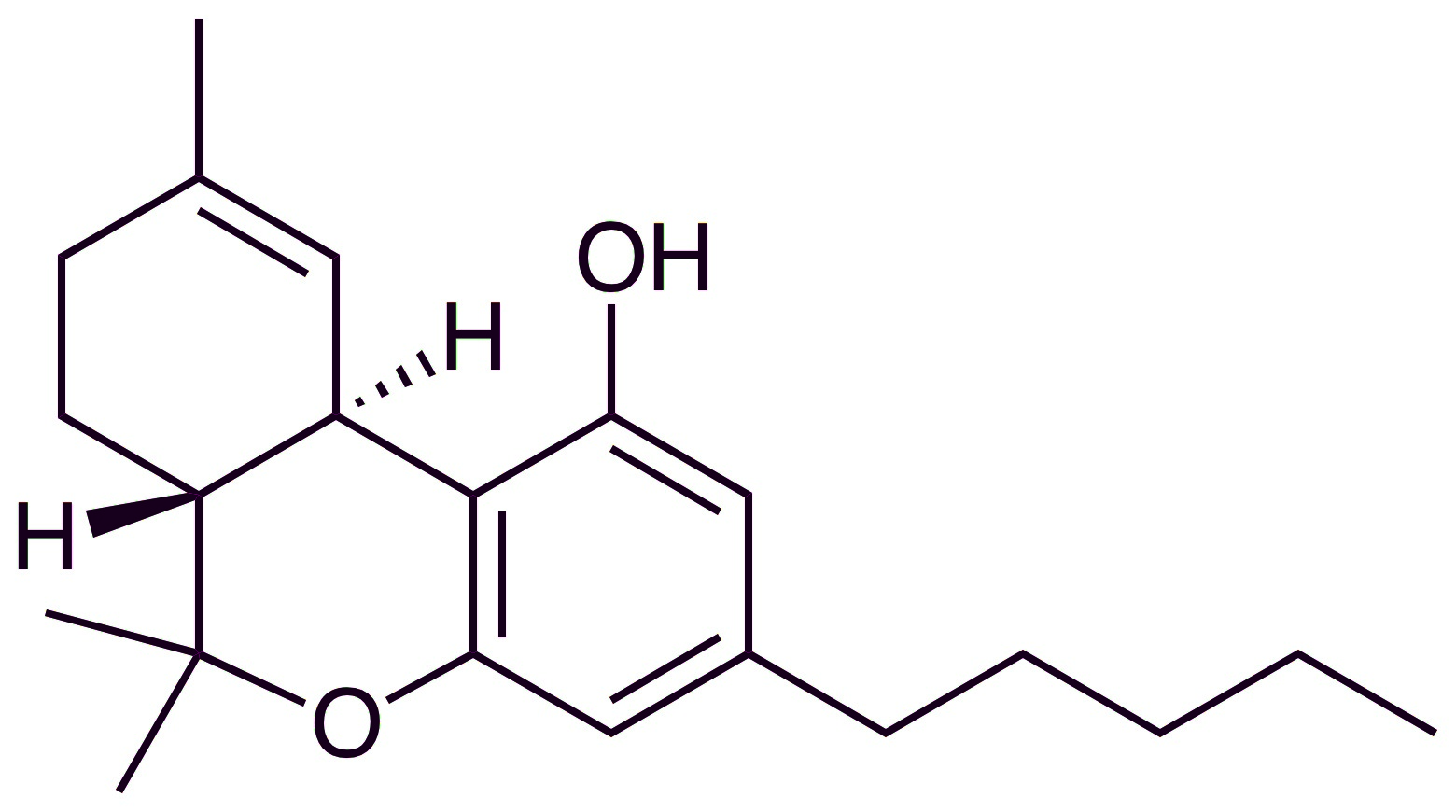 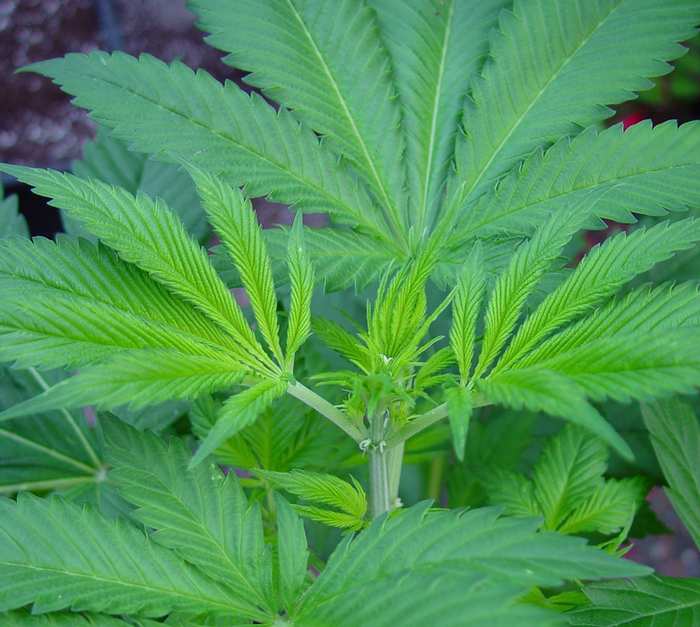 Over the past decade a novel class of neuromodulatory lipids, including N-arachidonylethanolamine (anandamide) and 2-arachidonoylglycerol (2-AG), that activates neuronal cannabinoid receptors has been the focus of intense research in neuroscience. These molecules are arachidonic acid derivatives produced by neurons and glia. These compounds act at the same site as the active constituent of cannabis sativa, Δ9-tetrahydrocannabinol (THC), and are termed endogenous cannabinoids (endocannabinoids; eCBs). Production of eCBs is driven by calcium influx secondary to strong neuronal depolarization or burst firing, and activation of some Gq-coupled neurotransmitter receptors and glucocorticoid receptors. eCBs are important retrograde modulators of synaptic signaling at central synapses. 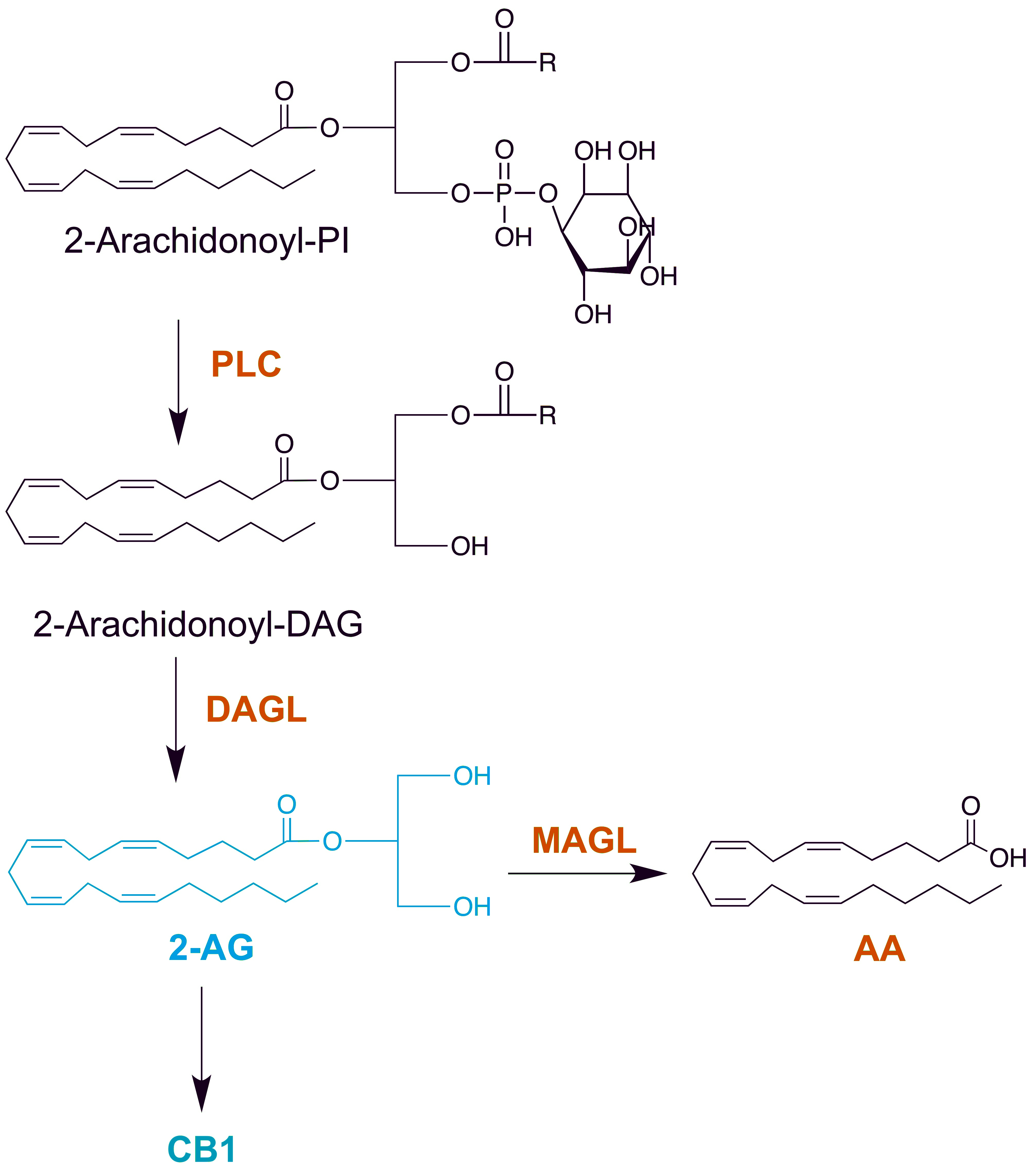 The primary role of endocannabinoids such as 2-AG is retrograde synaptic suppression. Upon neuronal depolarization or Gq-coupled receptor activation, 2-AG is synthesized and released. It diffuses to presynaptic axon terminals where it activates CB1 receptors. Activation of CB1 receptors causes a decrease in neurotransmitter release. CB1 receptors are located on both GABAergic and glutamatergic axon terminals synapsing onto principle neurons. CB1-mediated synaptic suppression can be transient or long-lasting depending on specific pre- and post- synaptic activity levels. 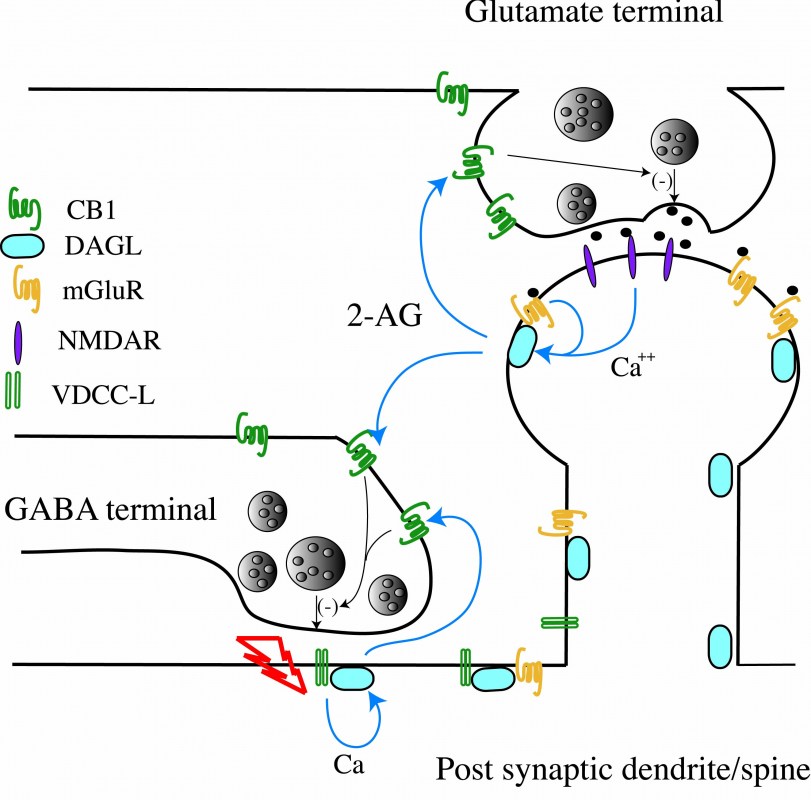 As we navigate our environments, we accumulate experiences that allow us to optimally avoid danger and achieve goals. These behavioral adaptions are mediated via long-term changes in synaptic plasticity and organization. A primary goal of our lab is to understand how experience reorganizes amygdala neural networks to optimize behavioral selection as a function of previous experience. We utilize behavioral models and in vivo and ex vivo electrophysiological approaches to elucidate the mechanisms subserving experience-dependent neuronal plasticity within limbic circuits.