For mother and daughter, life is not as it used to be: It is much better!

This video was produced by Rui Esmael.

Amélia Sebastião and her seven year old daughter, Juliana, are healthy and making long-term plans for their lives. Amélia is a Peer Educator assisting patients in her community and Juliana wants to be a District Administrator when she grows up. But this was not the case just a few years ago.

Back in 2009, Amélia was expecting her first child. “When I went to the antenatal care clinic, I had to take the HIV test. I took the test and the result was positive. When I went home, I did not accept it. I said: No, they are lying to me," she tells us. Right after the birth, her daughter got sick. "When I took her to the hospital, I was told the child should take the test. She took the test and it came out positive. When I went home I did not accept it," says Amélia. In 2013, Amélia had her second daughter. "After almost a month, her father got sick and lost his life in 2014. My second daughter died before reaching 3 months.” Amélia’s health deteriorated too, seriously affecting her quality of life. She could not even walk far enough to reach the household latrine: “It was normal for holes to be dug inside the house where I would pass my stools.” Things started to change when Amélia met Bethe Missa, a counselor trained and supported by Friends in Global Health (FGH) in Mocubela District in Zambézia Province. “When I went to the hospital, I went directly to the consultation room. Miss Bethe tested me [for HIV], and it came out positive. She sat down with me. At that time, instead of being her patient, I started being her friend.”

Bethe recalls that Amélia did not believe she lost her child because of HIV. “She thought it was her father-in-law throwing spells or evil spirits at the baby.” Amélia recalls that Bethe told her ‘My friend, please accept the test.’ I said no, I will not accept it. When I went back home I continued to have pains.” Amélia returned to the health facility and was counseled once again by Bethe, who made her understand she could lose her life if she didn't take the HIV treatment. This time, when Amélia was tested for HIV, Juliana was also tested again. "On that same day, Juliana started the treatment," explains Amélia, who also started treatment a few weeks later. In the beginning, Amélia had to deal with the treatment’s side effects, - but she wasn’t alone. She went to talk to Bethe, who encouraged her. "Continue taking the treatment, it [the side effects] will go away." When Amélia was not initially convinced, Bethe insisted. Amélia continued the treatment and today she says: “I don’t feel dizzy anymore. And when I walk I see my body is well." She tells us Juliana used to be sick all the time before starting the treatment and that now she is much better. "She is not like she used to be," acknowledges Amélia. With a very happy smile on her face, Bethe adds “[Amélia] now believes HIV exists, there is efficient medication, and she is adhering well. Her daughter is also on treatment, and she is getting better. She really likes my attitude, and I also like her a lot. She does not miss her consultations. She knows how to convince people. She talks about her experience while inviting people to take the test. She was very thin, with skin spots, but she is now very beautiful, showing a healthy body. So is her daughter."

The support provided by FGH to Counselors and Peer Educators is part of the Avante Zambézia project, funded by the President’s Emergency Fund for AIDS Relief through the Centers for Disease Control and Prevention.   FGH is affiliated with the Vanderbilt Institute for Global Health and supports Zambézia's Provincial Health Directorate in the implementation of HIV-related services. Counselors and Peer Educators are an important component of the program, as they support clinical staff and strengthen linkages between health facilities and communities. As of March 2016, FGH supports 381 Health Counselors and 481 Peer Educators across 101 health units in Zambézia Province. Collectively, they support almost 40,000 patients on treatment. During the 6 months leading to March 2016, their work has contributed to the enrollment on treatment of 2,406 pregnant women and 761 children. 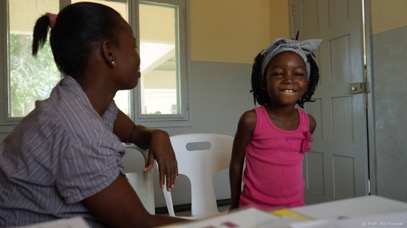 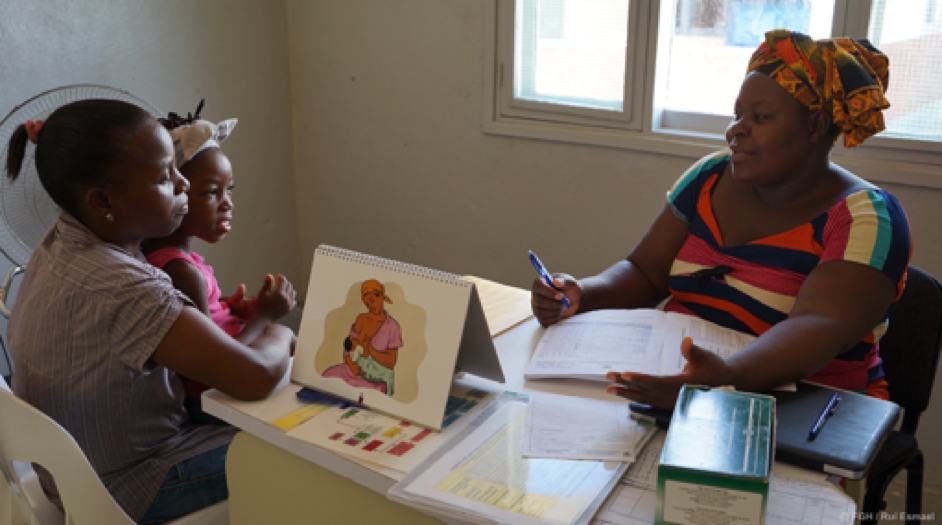 Amélia Sebastião and her daughter Juliana are counseled by Bethe Missa. Photo by Rui Esmael. 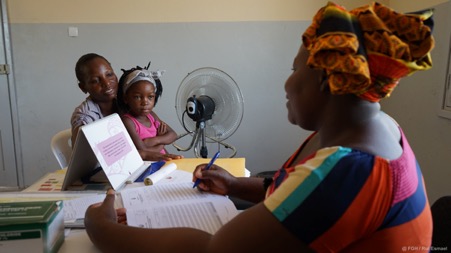 Miss Bethe tested me for HIV, and it came out positive. She sat down with me. At that time, instead of being her patient, I started being her friend.” Photo by Rui Esmael.