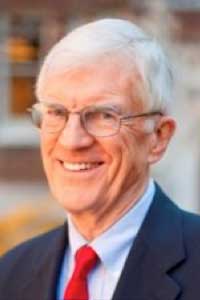 Dr. Johnston obtained a BA from Vanderbilt (Philosophy major) and MD from Vanderbilt Medical School. He had residency training in pediatrics at Vanderbilt and additional residency and fellowship training in immunology at Children’s Hospital, Harvard. He was on the faculty at University of Alabama Birmingham and Rockefeller University, then Chair of Pediatrics at National Jewish Hospital, Denver, and at Children’s Hospital of Philadelphia/Penn. He moved later to the March of Dimes as Medical Director while conducting research and serving as Chief of Pediatric Immunology at Yale. He ended his formal career serving for 15 years as Associate Dean for Research at the University of Colorado School of Medicine. He was raised in Atlanta and lives in Denver now with Mary Anne, his wife of 61 years.

His research interests included the basic science of host defense against infection, immunodeficiency disease, and child health. He is a member of the National Academy of Medicine (NAM), has chaired seven NAM committees, served on the NAM Board of Health Promotion and Disease Prevention, and chaired advisory committees for the FDA, CDC, and Howard Hughes Medical Institute. He is former President of the Society for Pediatric Research, the American Pediatric Society (APS), and the International Pediatric Research Foundation; a Fellow in the American Association for the Advancement of Science; and recipient of the Howland Medal from the APS, the highest award in American academic pediatrics, the Rall Medal for distinguished service to the NAM, and the Wiley Medal for exceptional accomplishments in strengthening the FDA. He is a Distinguished Alumnus of Vanderbilt Medical School and of Vanderbilt University; He is kept current in medicine by his family: one son, a Vanderbilt undergrad and medical graduate, is in orthopedic sports medicine practice (Atlanta), a second son is Dean of the Dell Medical School, UT Austin, his daughter is a practicing psychologist (Boulder), and his wife is a PhD medical educator.