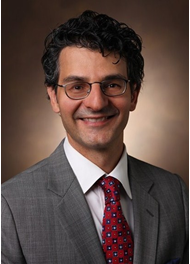 Reed A. Omary, MD, MS, is the Carol D. and Henry P. Professor and Chair of the Department of Radiology at Vanderbilt University Medical Center (VUMC) in Nashville, Tennessee.

With more than 20 years of experience as a practicing interventional radiologist, scientist and educator, Omary has authored more than 200 peer-reviewed publications and has presented more than 100 invited lectures at top institutions and international meetings. He has received more than $7 million in grant funding, which includes two R01 grants awarded by the National Institutes of Health (NIH) for research related to image-guided therapies for hepatocellular carcinoma.

From 2011 to 2017, Omary was a full member, and the only interventional radiologist, on the NIH Medical Imaging Study Section. Since 2017, he has chaired the NIH Special Emphasis Panels on Bioengineering Research Partnerships in imaging. He currently serves on the Board of Directors for the Society of Chairs of Academic Radiology Departments, and is Treasurer of the Association of University Radiologists. In January 2019, he will join the Editorial Board of the Journal of the American College of Radiology as an Associate Editor.

Omary is deeply committed to the training and mentorship of medical students, residents and fellows. He has trained 110 clinical interventional radiology fellows, and his research trainees have received more than 60 awards.

Prior to joining VUMC in 2012, Omary was a Professor of Radiology and Vice Chair of Research at Northwestern University Medical School. During that time he also served as Chief of Interventional Radiology Services at the Jesse Brown VA Hospital in Chicago.

In addition to his radiology leadership at VUMC, Omary co-leads the Medical Center’s strategic planning efforts, and is the founder and director of Vanderbilt University School of Medicine’s Medical Innovators Development Program. He is also an avid public speaker who promotes innovation in health care within multiple national radiology organizations and for the general public via his podcast, “Innovation Activists: Designing Health Care’s Future.”

Omary earned his B.S. and M.D. degrees from Northwestern University’s six-year Honors Program in Medical Education. He completed his residency in diagnostic radiology and a master’s degree in epidemiology from the University of Virginia before returning to Northwestern for his fellowship in vascular and interventional radiology.