EGFR  The gene symbol, ErbB, is derived from the name of a viral oncogene to which these receptors are homologous: erythroblastic leukemia viral oncogene. The ErbB family of proteins contains four receptor tyrosine kinases, structurally related to the epidermal growth factor receptor (EGFR), its first discovered member. In humans, the family includes Her1 (EGFR, ErbB1), Her2 (Neu, ErbB2), Her3 (ErbB3), and Her4 (ErbB4). (Wikipedia)

EGFR (epidermal growth factor receptor) is a 486 amino-acid receptor protein of 170 kDa with a single transmembrane sequence between 4 extracellular and 3 intracellular domains. Ligand-binding activity is in the extracellular domain 3; EGFR ligands include EGF, transforming growth factor-alpha, and amphiregulin.4 The binding of EGFR ligands induces dimerization allowing for receptor phosphorylation; such dimers can be homodimers or heterodimers with other HER family receptors (Siegelin and Borczuk Lab Invest 2014, 94:129-137). 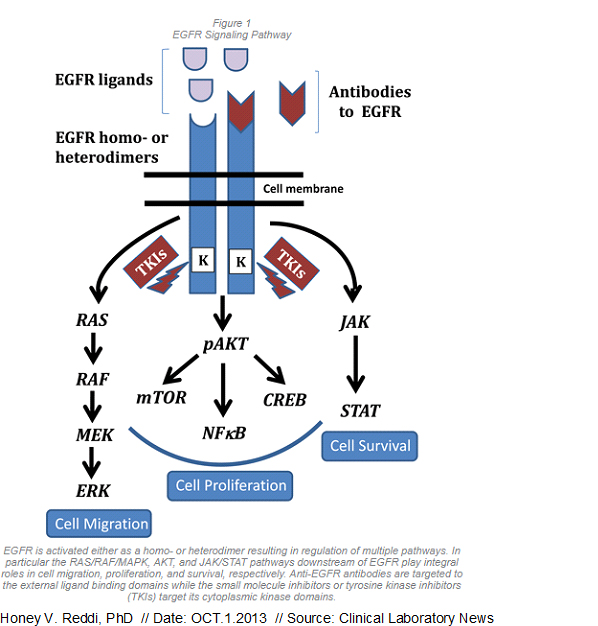 Mutations: L858R in exon 21 & in-frame deletion around LREA motif of exon 19 represent 90% of mutations. These mutations result in excitation of the signalling pathways such as AKT, PI3K, ERK, and STAT.

Most common in adenocarcinoma

Not so common in squamous and small cell lung cancer

First generation inhibitors (erlotinib and gefitinib) were found to induce a single point mutation in EGFR, T790M that resulted in acquired resistance.

EGFR expression or up-regulation of the EGFR gene occurs in 60 to 80 percent of cases (Cunningham et al NEJM 2004, 2004; 351:337-345). The addition of cetuximab to FOLFIRI as first-line therapy improves survival in patients with KRAS wild-type mCRC. No benefit for the addition of cetuximab to FOLFIRI was detected for any efficacy end point in patients

In irradiated NSCLC adenocarcinoma cells wild type EGFR translocates to the nucleus and binds both the catalytic and regulatory subunits of the DNA-dependent protein kinase (DNA-PK). DNA-PK is a critical component of the non-homologous end-joining (NHEJ) repair pathway that plays a dominant role in repair of  DNA DSBs. DNA-PK comprises three subunits, the 465-kDa catalytic subunit, DNA-PKcs, and two regulatory subunits, Ku70 (70-kDa) and Ku80 (80-kDa), which associate with XRCC4, DNA ligase IV, and Artemis at sites of double-strand breaks (DSB) to bring about the physical rejoining of DSB ends.

of EGFR exhibit a marked sensitivity to IR and pronounced delays in the repair of IR-induced DNA DSBs. Specifically, EGFR, receptors L858R or DE746-E750 are defective in radiation-induced translocation to the nucleus and fail to bind the catalytic and regulatory subunits of DNA-PK.

RAS Mutations  RAS mutations can promote oncogenesis when mutated at codons 12, 13, or 61. 80% of K-Ras mutations occur at codon 12 whereas very few mutations are observed at codon 61. In contrast, almost 60% of N-Ras tumours harbour mutations at codon 61 versus 35% at codon 12. H-Ras displays an intermediate behaviour with an approximate 50%:40% split between mutations at codons 12 and 61 respectively.Table 1(see below) lists tumor type and frequency of Ras mutation (Prior et al Cancer Res 2012, 72(10):2457-2467). 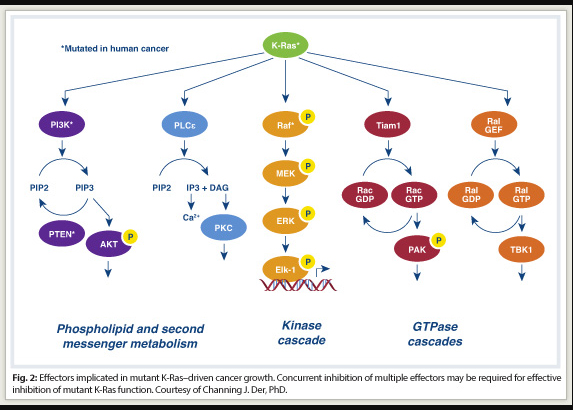 The following table lists various cancers and RAS mutations rates. Please note that there is literature to indicate that KRAS mutation rates in pancreatic cancer are as high as 93% (Biankin et al Nature 2012, 491: 399–405. 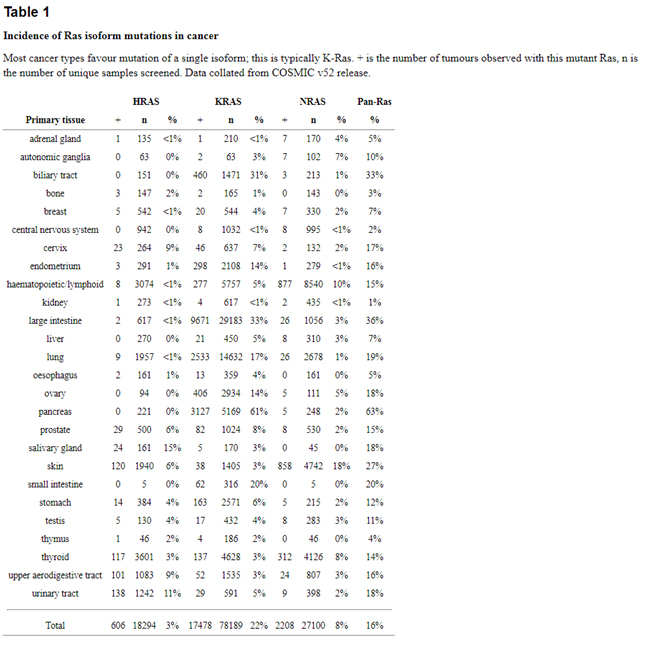 Phosphatase and tensin homolog: that dephosphorylates phosphatidylinositol (3,4,5)-trisphosphate (PtdIns (3,4,5)P3 or PIP3). PTEN specifically catalyses the dephosphorylation of the 3` phosphate of the inositol ring in PIP3, resulting in the biphosphate product PIP2 (PtdIns(4,5)P2). This results in inhibition of the AKT signaling pathway. 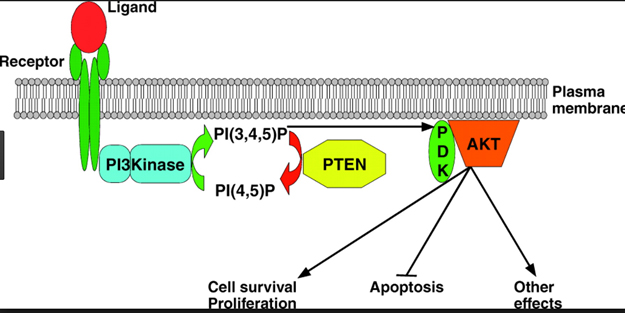 PTEN and Cancer:” Phosphatase and tensin homolog deleted on chromosome 10 (PTEN)/MMAC1 was cloned in 1997 through its association with the human cancer susceptibility locus at 10q23. PTEN is one of the most frequently mutated genes in human cancers. Germline PTEN mutations are primarily found in the autosomal dominant hamartoma syndrome Cowden disease. Hallmark features of Cowden disease are hamartomatous overgrowths of various tissues, including skin, breast, intestine and brain, as well as a predisposition to the development of breast and thyroid tumors –Yin and Shen, Oncogene 2008, 27:5443-53)

Frequent genetic inactivation of PTEN (MMAC1) occurs in glioblastoma (75% loss in patients older than 40 years of age, Ramkisson et al Neuro-Oncology 2015, 17(10): 1344-55),  endometrial cancer, and prostate cancer (up to 70%); and reduced expression is found in many other tumor types such as lung and breast cancer (see Teng et al Cancer Res 1997, 57:5221-25). Furthermore, PTEN mutation also causes a variety of inherited predispositions to cancer.