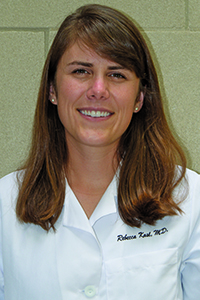 Rebecca A. Reynolds, MD, was born in San Diego, California and grew up there, as well as in eastern Nebraska. She attended the University of California, San Diego as a Regents Scholar. There, she graduated in 2011 with a Bachelor of Science degree in Bioengineering, earning summa cum laude and Phi Beta Kappa honors. Her medical degree was awarded from Vanderbilt University School of Medicine in 2015. During her four years at Vanderbilt, she developed a semester-long course to teach providers the principles of medical photography and led several local Nashville community service initiatives as her class vice president. Becca is interested in pediatric neurosurgery and global health, serving as an NIH Fogarty Global Health Fellow from 2019-2020 in Lusaka, Zambia. There, she studied pediatric hydrocephalus and spina bifida and continues her research from Nashville.

In her spare time, Becca is passionate about the outdoors and has directed volunteer youth trail crews in National Parks around the country. She enjoys spending time with her family and cheering on the Cornhuskers - Go Big Red!