The Central America Four region (“CA-4”: Honduras, Nicaragua, El Salvador, Guatemala) is a core low middle income country (LMIC) region in Latin America and the western hemisphere. The CA-4 population is approximately 36 million, and directly linked to nearly 5 million U.S. immigrants. The CA-4 nations are interconnected by geography, history, language and poverty. In 2006, the CA-4 opened their borders, similar to the European Union, and has been in transition towards a union of many aspects of their infrastructures. This policy includes their health systems, with an appreciable flow of patients across borders.

The human development indices (HDI) in the CA-4 rank among the lowest in the western hemisphere, 0.606 versus 0.915 in the U.S. Available data suggests that multidimensional poverty approaches 20%. An important challenge for health programs, as well as NCD and cancer control initiatives, is that nearly half (48%) of the CA-4 population live in rural areas. Lastly, the mean health sector and public health expenditures are low, ranging from 6.5-8.6%, compared with those in Costa Rica (9.9%) and the U.S. (17.1%).

Notably, the CA-4 countries account for a large number of recent immigrant populations to the U.S., which makes the region unique among global LMICs from a U.S. perspective. A number approximately equivalent to one quarter of the population of El Salvador lives in the U.S., the majority of whom are foreign-born. From the U.S. viewpoint, the research and prevention initiatives in the CA-4 may be informative for the U.S. Hispanic population, particularly for those from the region (over 4.5 million). 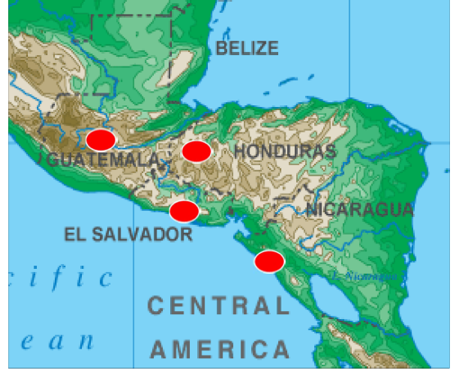 LMIC programs and research in cancer informatics and registration (2013-present)

Overview of Research and Education Partners

Vanderbilt Opportunities for Student Engagement in the CA-4: