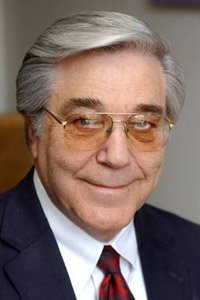 Dr. Billy G. Hudson, Ph.D., is the Elliot V. Newman Professor of Medicine, Biochemistry and Pathology, Microbiology and Immunology, and Director of the Center for Matrix Biology at Vanderbilt University. His research has focused on ancient collagen proteins that compose basement membranes, a specialized form of extracellular matrix that underlies epithelia cells. The matrix is essential for the development and maintenance of tissue architecture and function in all multi-cellular organisms from sponge to human. His research group discovered two collagen proteins, and named them alpha-3 and alpha-4 chains of collagen IV, and described how they, together with an alpha-5 chain, assemble into a complex α3α4α5 network that functions as a key component of the kidney filtration barrier. The network is directly involved in the pathogenic mechanisms underlying several diseases that cause kidney failure in millions of people: autoimmune Goodpasture syndrome; hereditary Alport syndrome; thin basement membrane nephropathy, Alport post-transplant nephritis, and diabetic renal disease. His work has defined the three-dimensional structure and antibody binding sites of the autoantigen of Goodpasture syndrome, and discovered a new sulfur-nitrogen chemical bond (=S=N-), named sulifilimine bond, that fastens the autoantigen together, uncovering clues to the pathogenesis of a prototype autoimmune disease, Science (2009).

Recently the Hudson team discovered the enzyme, named peroxidasin that forms the sulifilimine chemical bond, Nature Chemical Biology (2012), and the evolutionary origin of the sulfilimine chemical bond and peroxidasin, Proceedings of the National Academy of Sciences (2014). Just recently, they discovered that the trace element bromine is required for bond formation and that bromine is an essential trace element for tissue genesis throughout the animal kingdom, Cell (2014). These discoveries profile collagen IV scaffolds (suliflimine-crosslinked) as a primordial innovation that is essential for tissue evolution.

He is a co-founder of NephroGenex, a biotech company that is developing Pyridorin, a drug-candidate which was discovered in his laboratory for the prevention of diabetic kidney disease. A phase III clinical trial will begin 2014. He is also co-founder, along with wife, Dr. Julie Hudson, of “Aspirnaut”, an educational initiative that encourages students, kindergarten thru undergraduate, to pursue studies and careers in science, technology, engineering and mathematics.

Billy received his Ph.D. from the University of Iowa in 1966 and performed his postdoctoral training at Harvard University and the U.S. Army Research Institute of Environmental Medicine. He is the coauthor of over 200 scientific publications and 30 patents.

My research program focuses on the structure and function of type IV collagen, the major constitutent of basement membranes (BMs). BMs are a specialized form of extracellular matrix that compartmentalizes tissues and play an important role in tissue remodeling and morphogenesis. BM function is impaired in both hereditary and acquired diseases that affect type IV collagen. In Alport syndrome, a hereditary renal disease, the collagen genes are mutated. In Goodpasture syndrome, a rapidly progressive renal disease with lung hemorrhage, the collagen is the target for autoantibodies. In diabetes, the vascular complications of nephropathy and retinopathy also appear to involve this collagen.

Type IV collagen has recently emerged as a family of six homologous alpha-chains, designated alpha1 to alpha6. My research group discovered the alpha3 and alpha4 chains. The alpha3 chain is the target for autoantibodies in Goodpasture syndrome and the alpha5 chain is the target for autoantibodies in a novel autoimmune disease that causes renal disease and skin blistering. The alpha3, alpha4, and alpha5 chains are mutated in Alport syndrome causing defective assembly of a supramolecular network which leads to progressive renal failure. Recently we have shown that the code for the assembly of chain-specific networks resides within the noncollagenous (NC1) domain of the collagen chains. The three-dimensional structure of this domain was recently determined by x-ray crystallography, revealing novel information about structure and function.

Most recently, we discovered that type IV collagen may represent an important new class of anti-angiogenic molecules for the treatment of neovascular diseases, such as tumor growth and metastasis. Our findings have led to the development of two drugs: Pyridorin, a molecule inhibitor for the treatment of diabetic renal disease now in phase II trials, and Angiocol an anti-angiogenesis agent that targets basal lamina, slated for a phase I trial next year.